Festivities in the area

Carnival (Antroxu) is the starting point of annual festivities. Fancy dress parades, murgas (marching bands)
festivals and the burial of the sardine mark a time when good food is guaranteed.

Easter processions are especially attractive, reaching their most important point on Maundy Thursday, when the
Nazareno image is taken in a procession to a church on a hill.

El Rosario, celebrated on the 15th of August, is the fishermen’s festivity; on the previous night, habaneras
and other old songs are sung around bars in the Villa. On the next day, at the time of the high tide, there is a marine procession, when
the whole fishing fleet escorts the image of the Virgin in her boat trip around Luarca’s coastline.

San Timoteo is celebrated on the 22nd of August, and it is considered by many as the funniest, most explosive and
participative festivity in Asturias. Children fancy-dress parades, musical performances and lively night festivals lead to the main festive day,
a civil-minded procession around the popular horse-pulled cart that carries wine, delightfully accompanied by a group of bagpipers, tireless
brass bands, marching bands and thousands of pilgrims. There is an old tradition of fireworks on the 21st of August on the breakwater at the
docks, and also traditional are the gigantes y cabezudos parades (giants and huge-headed figures).

La Vaqueirada, in Aristébano, is dedicated to vaqueiros (cowherds), and includes the ethnographically
interesting boda vaqueira (cowherd wedding), in which bride and groom come with their trousseaus on the carts; one will not
miss the typical dances of vaqueiros, incredibly strong and vigorous, which were immortalized by Rogelia la Vaqueira
all around Europe, to the sound of the payietcha (frying pan) and the tambourine.

La Regalina in Cadavedo, is another well-known festivity that still holds an Asturian flavour. All the locals,
as well as a great number of visitors, take part in the festivities, wearing regional dresses on their way to the hermitage. This festivity is
known for its colourful procession, dances and picnic in the country and for the magnificent landscape where it takes place.

Paredes: San Pedro, 29 June. The second Saturday in August, the parish plays the main role at the
Ecological Canoeing at River Esva. 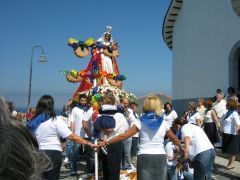 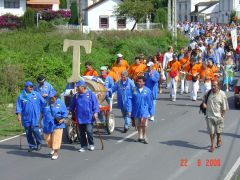